The CII have published the annual exam pass rates for 2015. We take a quick look at the results in comparison to previous years – of interest to those studying for their CII exams.

Using the figures from 2012, 2013 and 2014, you can see below how these percentages have changed for the Diploma and the Advanced Diploma in Financial Planning exams. (Information for the other exams can be found on the CII website).

For the R0 units, the numbers are mixed for 2015; only one subject shows an improvement from 2014 and that is R06 the financial planning paper. R01 through to R05 all show lower pass results from the previous year. The pensions module and the personal taxation module continue to be a challenge with only 49.53% of candidates passing R04 and R03 only marginally better with 50.90%. In fact the figures for R04 have progressively worsened since 2012 whilst R08 the pension update module shows a very impressive 92.51% of students passing last year.

The CII’s exam pass rates for 2015 have been released.

With the advanced subjects, the pensions paper, AF3, continues to be a challenge; the pass rates have deteriorated each year since 2012 with 2015 showing a miserable rate of just 31.47% of candidates passing. The pass rate for AF6 (Senior management and supervision), shows a decent leap from the mid to high 40%’s in both 2013 and 2014 up to an impressive 72.29% in 2015 which means it takes top position for last year. The good news also is that AF2 (the Business financial planning paper), has shown improvement from 2014 jumping up to 52.27%. AF1 figures have also improved as have the figures for AF4. 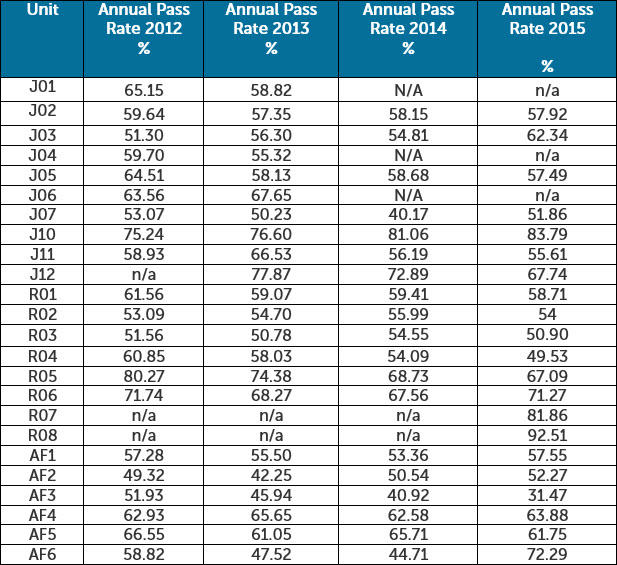 Grab the resources you need!

If you’re studying for any of the CII exams and you want to make sure that your results are reflected in this pass rate figure, then you can give yourself an edge with downloadable resources from Brand Financial Training. Click on ‘CII Exams’ in our navigation bar and select the relevant exam to find out more.

If you’ve already sat some of the above exams in 2015, were these results surprising to you or are they what you expected?